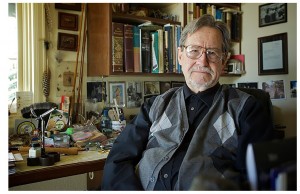 It’s a sad day for all of Boulder that one of our own past away on September 18th.  Gordon Wickstrom was 88 and was a native Boulderite who lead a full and storied life across many rivers.

I was hoping that the cancer treatments he was given would be successful but, alas that was never to be.

Gordon grew up in Boulder, going through all the public schools here and then on to a number of colleges and was Professor of Theater at Franklin & Marshall College. He went on to achieve his Ph.D at Stanford University as he continued in everything theater. Over the years, he directed over 100 plays including directing and acting at the Colorado Shakespeare Festival. Gordon loved Shakespeare and played the role of King Lear a number of times.

We all knew Gordon, “as one” with the English language, and he was forever fun to be around. When he and his wife, Betty, moved back to Boulder after his retirement, Gordon became a Boulder Flycaster and was a member until his death. Gordon wrote two angling books; “Notes from an Old Fly Book” and “Late in an Angler’s Life”. I had Gordon sign both my copies. He made many contributions to the distinguished The American Fly Fisher, which is the journal of the American Museum Fly Fishing.

My connection to Gordon began many years ago when my father and Gordon’s father were business associates. My dad owned a coffee shop/drive inn called Bushes Drive Inn and Gordon’s father, Percy Wickstrom, owned Boulder City Bakery where my dad bought all his bakery goods. I was too young to remember much about both the bakery and Gordon, but in later years, we shared many memories of those times growing up in Boulder. That Boulder childhood connection carried on as the years became decades.

I remember when Gordon gave a speech to Boulder Flycasters when we dedicated the Boulder Flycasters Memorial Park (just past the tunnel, up Boulder Canyon). He was a superb speaker with his deep voice and commanding stage presence.

Gordon was the only one I ever knew that could tie a fly without a vice and he demonstrated it to me on more than one occasion . . . Amazing!  Gordon just loved to fish and his uncle gave him a bamboo fly rod as his first fishing rod.  He just loved to fly fish and his books showed that, and we shared one lake that he called ghost lake just north of Boulder . . . the lake dried up in the late ’60’s making it true to its name. The DOW stocked it for a number of years and my dad took me there often.

Gordon was a collector of all things fishing. He was the first person I went to when the Boulder Library asked Boulder Flycasters Board to prepare a history of fly fishing in the Boulder area. He contributed so many interesting fishing items that we weren’t able to show everything.   Gordon got into the internet with his monthly and/or weekly blogs the Boulder Creek Angler. If you go to: http://bouldercreekangler.blogspot.com he posted his last essay, “The Fisherman” written on September 5, 2014. In it he wrote on . . . “all matters of art, life, love and angling” and I believe he lived by those words.

If one could describe Gordon’s life, it would be about a full a life as anyone I have ever known. I bet he and Betty got more out of the 88 years than anyone could have ever imagined.   I will miss that guy and will never forget him as long as I live!