Maurice Blackmon, past BFC president, died of non-smokers cancer on August 22. Maurice was a staple in the annals of Boulder Flycasters in the ’80s and early ’90s.

Maurice was a board member for many of those years and loved fly fishing. He was an outdoorsman with a special passion for steelhead. He presented his skills to the membership on numerous occasions and for many of the local shops in the area.
Maurice loved discussing his steelhead angling techniques on his beloved Babine River in British Columbia.

An adventurer, he was often seen fishing in Alaska, the Madison River and others in Montana and most all the rivers in Colorado and in Wyoming.

Maurice was a noted scientist all his life, worked and taught in Colorado, was schooled at MIT, earning his PhD there. He spent his career working at NCAR (where I first met Maurice), later at NOAA and returned to NCAR as Director of the Climate and Global Dynamics Division. He retired in 2005. Maurice was a Fellow of the American Meteorological Society and a symposium to honor his contributions to atmospheric science was held at NCAR in 2007.

His funeral mass will be held this Thursday, August 30th, at 6:30 p.m. at St. Thomas Aquinas Church on the hill with a dinner following the mass in the Church Hall downstairs.

There are many BFC’ers who will miss his contributions to BFC, his sense of humor and his enthusiasm for angling. 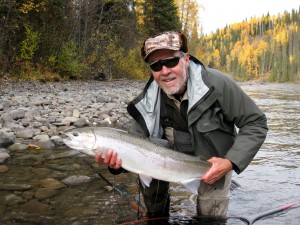 Maurice Blackmon on the Babine