The Pebble deposit is a massive storehouse of gold, copper and molybdemum, located in the headwaters of the Kvichak and Nushagak Rivers, two of the eight major rivers that feed Bristol Bay. If built, Pebble would be one of the largest mines in the world. Because of its size, geochemistry and location, Pebble runs a risk of polluting Bristol Bay, one of the world’s few and most productive wild salmon strongholds that supports a $500 million commercial and sport fishery.

Our speaker on September 27 will be Todd Bryan, of the Keystone Center, who is heavily involved in the Pebble Mine proposal as a facilitator and mediator.  He will present perspectives on both sides of the issue and will have recently returned from his work in Alaska.

Todd has worked in the environmental field for more than 30 years and has spent more than 15 years as a mediator, facilitator and trainer.  He works with government agencies, tribal governments, non-governmental organizations, industry, and communities, where he develops collaborative approaches to environmental and natural resource decision-making. 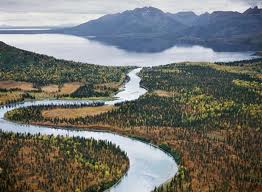 For more information on the Keystone Center: www.keystone.org