BFC donated $5,000 toward the ongoing reconstruction of the Evert Pierson kids’ fishing pond. The card below is from the City of Boulder Parks and Recreation.

We look forward to having this great resource available for the future anglers of Boulder!

The premier of the film “Waypoints” will be shown at eTown Hall (1535 Spruce Street in Boulder) on Friday November 8th.

Doors open at 6:30 pm so come early to enjoy a pre-event social gathering and giveaways. The film starts at 7.30 pm. Film segments include St. Brandon’s Atoll in the Indian Ocean, Patagonian Chile, Southeast Alaska for Steelhead, India for Golden Mahseer, and the jungles of Venezuela for payara,

All proceeds from this event will benefit Front Range Flood Relief through Colorado Trout Unlimited.

More information on the film is available here.

Tickets may be purchased here.

Just a reminder that on Monday, September 10, at 6:30 PM, a series of fly fishing film shorts will be shown on the 6 TVs at the West End Tavern. Come join like-minded fly fishing enthusiasts for some bar-side video!

More information can be found at the following link: http://www.cheekyflyfishing.com/cheekyfilmblitz

In an effort to showcase both the beauty and progression of modern fly fishing and to spark some local interest in the sport, Cheeky Fly Fishing is hosting the Cheeky Film Blitz at the West End Tavern in Boulder, CO.

On Monday, September 10, at 6:30 PM, film shorts from some of the Industry’s best videographers, including Shellfish Media, Daniel Goz & Jan Bach Kristensen, Gambit Stone, Faceless Fly Fishing Media, Gin Clear Media and Gray Ghost Productions, will be shown on the 6 TVs at the West End Tavern. The event is not a national tour, but rather an opportunity to raise awareness and promote the sport that we all love in a very grassroots manner. We are looking forward to it and hope that you will be able to join us.

More information can be found at the following link: http://www.cheekyflyfishing.com/cheekyfilmblitz

On Wednesday night, BFC hosted Chad Pettrone as he gave a talk on when/how/where to fish the Big Thompson river.  Chad has been fishing and guiding on the Big Thompson for a number of years and did a great job sharing his knowledge.

It was full house! 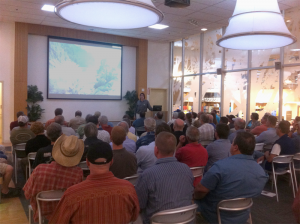 Chad covered a lot of ground, first with a series of photos working up the canyon from Loveland all the way to Lake Estes.  He talked about what kind of water can be found at the various pull-outs and landmarks. 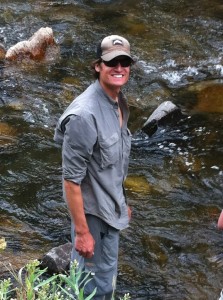 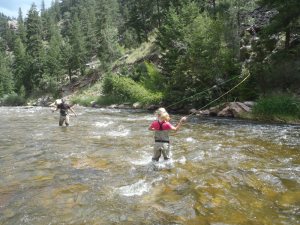 He finished up by talking about the insect life on the river.  The Big Thompson is a healthy river with a number of bugs to keep in mind… 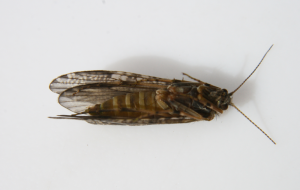 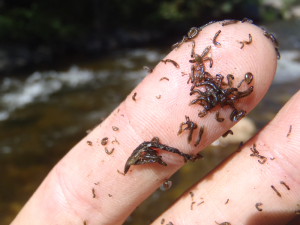 At the end of the presentation Chad sold out of his waterproof Fly Selector for the Big Thompson.  If you wanted one of these riverside “cheat-sheets” to insect hatches and matching flies for the Big T, please email Chad directly, he is having more made.  [email protected] or visit the site www.flyselector.com

Thanks to Chad for an informative talk!

For future BFC chapter meetings, keep an eye on our event calendar. 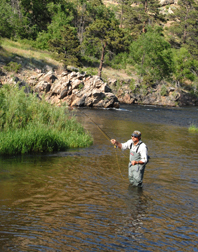 On April 28th, Sylvan Dale Guest Ranch will again host Boulder Flycasters for a day of Fly Fishing all waters including about 3/4 mile of the Big Thompson River on the main property and the five or so lakes in the valley.

The day will start at 8:00AM and we’ll fish until dusk, including an outstanding BBQ lunch at mid-day.

The day is limited to 16 anglers so get more information, then sign up now!