Here is a post from by Kirk Webb, Taylor Creek Fly Shops.  A good many BFC members fish the Pan but this is over the top!!
On Monday, with temperatures in the single digits, I decided to take a drive up the Fryingpan and go fishing for a few hours. Mile after mile, pool after pool, the entire river was devoid of anglers. I’m no longer the guy that fishes the “Toilet Bowl” pool immediately below the dam, but when the opportunity presented itself with an empty river, I thought what the hell and gave it a go. Twenty minutes into my adventure and several fish later, I hooked the king of the river — a 20-pound-plus brown trout. 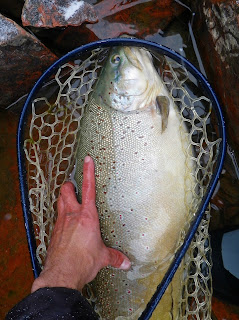 I’ve played this big fish scenario in my dreams several times; how to do everything right and nothing wrong. Never before has my focus been so intense. I thought about every move, every action and reaction, and was lucky enough to not only hook this beast but land it by myself on an empty Fryingpan River. The fly that fooled the beast was a classic, Tim Heng’s mysis shrimp in a size 16. The size of the fish will go down in Fryingpan and Colorado lore as one of the largest brown trout ever landed with an estimated weight of between 21 and 23 pounds. What makes this fish special is the girth at 24-plus inches plus, and a length of 29-plus inches. 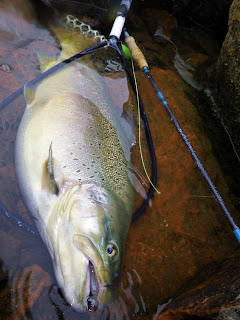 With some incredibly large fish to my name at an early age, I thought for sure that I had already caught the biggest brown trout of my career, only to once again experience and hold in my frigid and shaking hands the fish and experience of a lifetime. In the time since, I’ve still been laying in bed sleep deprived, restless, reliving my fish and answering the now frequent emails, phone calls and social media “friend requests.” The now-viral pictures of the fish spread like wildfire over the web this past week and I am ultimately just thankful to admire briefly and release this wonderful fish back into the Fryingpan River so another angler can have the same opportunity that I had.
Merry Fishmas. 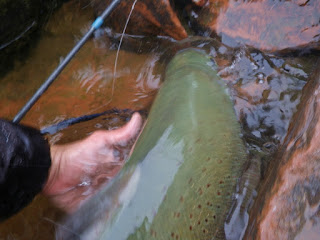